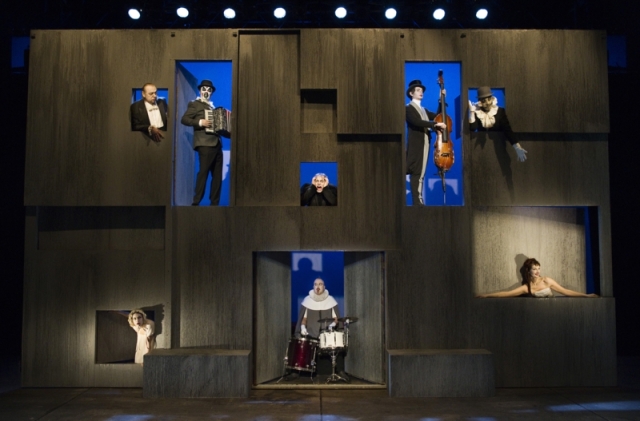 I was fortunate enough to get tickets for a limited run of the Tiger Lillies bizarre interpretation of the Shakespearean classic, a showing of only five performances in the UK. For those not familiar with the Tiger Lillies, they are a musical trio who play what is best described as ‘punk cabaret’; a blend of lead singer Martyn Jacques self taught castrati vocal style and the eccentric instruments used during a performance.

A profound vaudevillian, Jacques leads the audience through a darkly comical reimagining of the Shakespearean tragedy, holding together the key elements of the play with the combination of musical interpositions and a troupe of performers who fully engage with their characters, as well as imaginative stage design that often provides visual indications of the story.

The play begins with Jacques (complete in his customary fairground makeup) entering the stage in front of a large curtain, from which the actors heads protrude through various holes in the material. The characters are introduced to us with the recitation of key lines as Jacques barks a tale of sin and avarice accompanied by his accordion, which draws upon the audiences’ previous knowledge of the play, creating a sense of foreboding for the characters inevitable fates. After a soliloquy from Hamlet, the stage curtain is lifted to reveal one of the play’s most visually powerful stage sets, a large table set at a horizontal angle toward the audience. A dizzying sense of vertigo is achieved as Hamlet takes his place at the wedding party table with his mother and uncle as Jacques enters the stage to sing the song King is Dead. The actors move in slow motion as the song progresses, a stylistic motif that is carried through the play at certain stages to enhance or delay action sequences.

Moving on to the appearance of the ghost, Hamlet’s late father is presented to the audience as a projection on to the bare chests of the cast who form a group onto which the face speaks. As the dead king speaks, the group itself sways back and forth in a ghost like manner, adding to the surreal quality of the scene but also enhancing the feeling of anonymity one gets from the players themselves. They are in some ways interchangeable, often playing background characters or even set pieces as well as their primary role. This is seen most clearly with the introduction of ‘Rosencrantz’ and ‘Guildenstern’, two characters who remain mere whispers of themselves, performed through the character of Hamlet himself. He uses the actors around him to perform a sort of puppet show that reflects his most memorable conversation with his two old friends, a comic interposition and one that provides a light reflection of a later scene where the main actors apart from Hamlet are strung up like marionettes to perform the play-within-a-play.

One of the most visually decadent moments in the play is demonstrated through the character of Polonius, a masked player who is both comical and surreally twisted in form. The scene where Polonius talks with his daughter about the dangers of getting too close to the prince makes wonderful use of the recurring stage set; a large wall with areas cut out to create windows and doors. Polonius’ head pops up at the top of this wall as Ophelia runs about on stage. Suddenly, she is captured by two enormous arms that spill out from the same window as Polonius. Gertrude and Claudius take control of the arms and Ophelia is swept up with the use of wire rigging to be thrown about by Polonius’ all consuming hold. Wire rigging is used throughout the play to create several effects. During Ophelia’s ‘dream’ sequence, Hamlet and Ophelia perform a delicate and intricate aerial dance, a unique look at the intimacy between the two characters that is only hinted at in the original play. Similarly, Ophelia’s drowning is symbolised by the actor walking horizontally up the wall (via a wire) onto which an image of water is projected, a slow and powerful scene that is heartbreakingly emotional.

The final scene is one of the most interesting in terms of stage direction. Instead of facing each other during the final swordfight, Hamlet and Laertes stand toward the audience either side of Claudius and behind Gertrude who takes her place at the centre front of the stage. The action progresses in a series of slow motion sword attacks and parries toward the audience as the actors stare dead ahead, a Brechtian take on the memorable tragic end of the play. As the characters find their target, the action is suddenly played out in real time so that the silence of the previous action is dramatically disrupted with the cries of the actors. As the scene closes, after the death of the queen and the three final leads, the Tiger Lillies emerge for a final time to sing the breathtaking Desolation Song, a stunning finale with lyrics that sum up the play wonderfully.

Overall, I thoroughly enjoyed the performance, counting it among one of the top five most sublime and powerful plays I have ever witnessed. The direction was well thought out and invoked the Brechtian practice of ‘epic theatre’ to distort the audience’s perception of the theatre space, as well as beautifully designed stage sets that were simple impressions of a castle wall or the chambers of Ophelia for example. At times, the actors would engage with the audience, particularly poignant when Hamlet appointed the audience to almost sing along with the song 1,2,3,4. The actors themselves seemed to be occasionally aware of the Tiger Lillies but never directly interacted with them. This created an interesting effect as the band appeared as manifestations of the characters own inner beings, lyrically voicing their thoughts.