With a background in design and illustration, Carisa Swenson discovered her passion for sculpture after studying with renowned doll artist Wendy Froud (the creator of ‘Yoda’ from the Star Wars franchise). Swenson creates intricate and disturbingly wonderful art dolls that tread a fine line between eerie and cute, asking the viewer to question preconceived notions and even to consider wider social issues at play. Influenced by a variety of sources including the stop motion works of Ray Harryhausen and the Brothers Quay, Carisa is an expert in formulating her dreams into reality, giving her audience a glimpse into an alternate world where perverted animal forms are brought grotesquely to life.

Hi Carisa, can you tell us a bit about what you do as an artist?

Hello, and thank you for this opportunity!
I create sculptures and one of kind art dolls based upon creatures both real and imagined. Most of my dolls are a combination of either Magic Sculpt or Creative Paperclay for the head and limbs, with a wire and fabric body. All are painted with acrylics.

How important is the incorporation of mythology and fairy tale in your work?

Both have been and continue to be a tremendous influence in my work, as I grew up in a household filled with books on Greek, Roman, Norse and Egyptian mythology. My father was a high school English teacher who taught classical mythology, and much of my childhood was spent pouring through his books memorizing the different gods, goddesses and most importantly the fantastical creatures that inhabited them. Not to mention the rather raunchy exploits of the deities…
While many of my pieces are not outright interpretations of these tales, the influence of mythological archetypes and magical creatures is there.

Let’s talk about your use of mixed media. Where do you find the materials that are used in your work and how much does that influence the final piece?

More often than not, the final sculpted piece and costuming tend to work together.  Most of my material is sourced from local fabric, vintage bead and art stores; and when beginning a piece, I have a general idea or feel for the personality or character. This often changes during the sculpting stage. I’ve found it’s better not to force a concept onto a piece that is taking quite a different path. Though I may have a specific textile or color palette in mind, once the sculpting phase of the piece is completed the final expression or attitude of the sculpture ultimately determines what costume and colors a doll will be sporting.

Where do you come up with the ideas for your creatures?

Where there is not a pen or piece of paper to be had! I’ve found that physical activity and leaving my studio allows my thoughts a sense of freedom. Running and taking walks through parks or forests clears my head and provides me with a source of ideas, often effortlessly. Of course, remembering them once I get home is another thing! I also find that going to museums creates an almost meditative atmosphere and allows my mind to wander, to pick up new concepts and ideas as well as break through creative blocks.

Your work often has an eerie quality that seems to pervert the traditional idea of a ‘cute’ animal or doll. To what extent do you think this impacts upon the audience and how important is it for you to play with ideas of culture and society in your work? 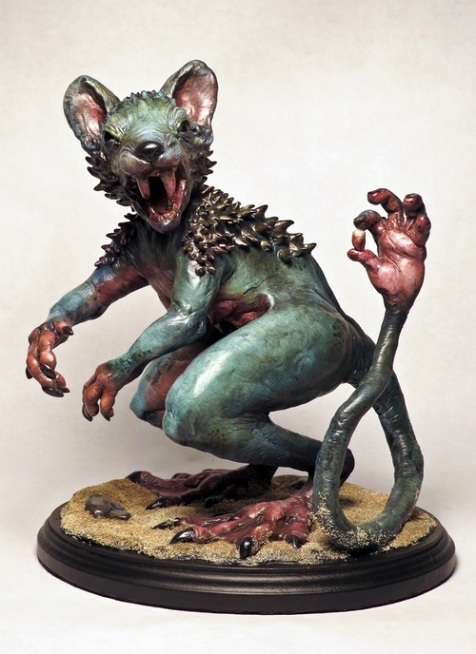 f pairing traditionally “cute” animals with a disturbing truth. The book and especially the animated film “Watership Down” certainly speaks to that and not surprisingly has been a huge influence on me since a child. Because I grew up having to live with all the stereotypes our society projects onto female children, and which was in my nature to subvert, I build a sense of unease in my mice, rabbits and other “storybook sweet” creatures. A rabbit will resist and fight just as viciously as any other creature when it must.
Growing older, I’ve found that the desire to incorporate issues into my work, such as how humans treat the environment and wildlife; gender, gender expression and the suppression of, as well as bodily autonomy is becoming more insistent. There is a climate of anti-science, anti-reason, and a persistence of holding fast to tradition right now in the United States that is distressing and I expect that these issues will be explored within my sculptures and dolls in the coming months and years. 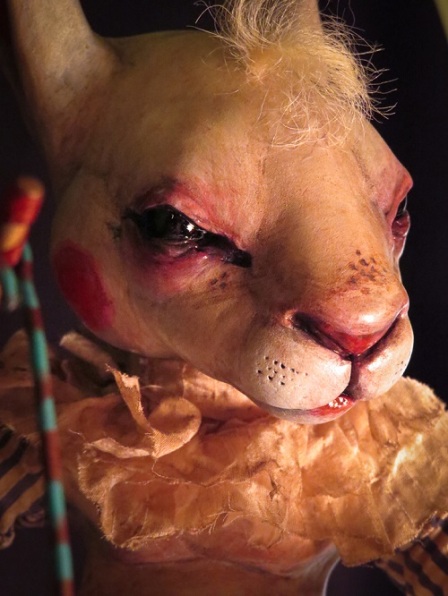 Do you have a favourite piece?

Yes. “The Mouse King”, a doll inspired by the Mouse King of The Nutcracker, and hairless mice used in lab experiments. This doll was my first serious attempt at using epoxy clay and a piece that I am truly proud of. Many of my pieces up to that point were sculpted in an air-drying paper clay and had minimal detailing. Working with this new medium allowed me to get lost in the piece and discover a new sculpting style. It is also my first creation that felt much darker than any of my former pieces and allowed for a greater expression of my somewhat morose nature.

What, in your opinion, does ‘creativity’ mean?

Allowing yourself the freedom to let go of self-conscious thought and briefly transcend the mire of rationality to produce something which taps into your passion and joy.

What is the future of your artwork? What would you like to do that you have not already done?

There is still so much to do, and I have an ever-growing list of projects to accomplish! Right now, I’d like to explore the lives and worlds my creatures inhabit and allow them to have more of an existence then just sitting on shelves…whether that is through animation, puppets, or a book, I haven’t yet decided—there is much I have to explore within my stable of characters and personalities. Outside of my dolls, I would absolutely love to put my sculpting talents towards film or education, such as museum work.

What would your advice be to anyone interested in getting involved in the art world?

Having talent is wonderful and certainly helps, but you need more than that to achieve your goals. You need to be willing to sacrifice time on a consistent basis in order to improve—at the very least commit to devoting a half hour of your day to your craft. Be open to constructive criticism. I’ve noticed this concept has been lost as of late, and the idea of “constructive criticism” is now seen as just “criticism”. If you ask for someone’s opinion, try to let go of your ego and just LISTEN instead of defending your art. Often I see young artists ask for a critique, but what they really want to hear is that their art is brilliant.
You must actively pursue artistic avenues…expecting to only do your art and have galleries, publishers, etc stumble upon your work and propel you to stardom is unlikely. Many artists I know who have reached even a modicum of success have been toiling and working for years (10+) on their art (often not even fulltime)! Always be a prof

essional in your communications and how you present yourself. Don’t take things personally. Get rejected? It’s going to happen. Not everyone is going to like what you do. While it’s disappointing, sometimes it can work out for the better and push you in a new direction. Most importantly? Find your own voice. To be inspired by an artist’s work is one thing…copying their style is quite another. Don’t grab that low hanging fruit — make your art truly YOURS.